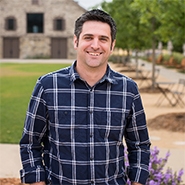 After eight years managing restaurants including three years at San Francisco-based Morton’s Steakhouse, Jeff Zappelli joined HALL Wines in 2006, helping define one of the most successful Direct to Consumer industry efforts in the Napa Valley. In 2012, with the 2010 vintage, Craig and Kathryn Walt Hall unveiled a long sought-after project –a Pinot Noir and Chardonnay label under WALT which expanded Zappelli’s role to both HALL and WALT brands.
In 2016, Zappelli was appointed General Manager of WALT, making him responsible for the day-to-day operations and strategic planning for the Sonoma-based brand. Zappelli is an active speaker throughout the Bay Area, participating in conversations and panels related to direct-to-consumer trends, wine industry technology, sales as a science, CRM and direct marketing campaign strategies.
Born in Seattle, WA, he attended the University of California Santa Barbara and earned a Bachelor’s of Science in Biopsychology. He currently resides in Marin County with his wife, Veronika, and their three children.