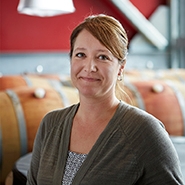 WALT Winemaker Megan Gunderson began her career in the Napa Valley in 2001 when she moved from Colorado to California and worked as an intern at Robert Mondavi Winery. While at Mondavi, she discovered a passion for wine and viticulture and went on to become a Laboratory Manager for St. Supery Vineyards in Rutherford, then Dominus Estates in Oakville. At Dominus, she was able to refine her winemaking skills under the mentorship of Christian Moueix and Jean-Claude Barrouet, learning to hone her winemaking craft with unique methods. Megan has made several trips to France to study winemaking techniques, the most recent to Burgundy during the summer of 2011. Megan’s multiple degrees in Biochemistry and Molecular Genetics have given her a unique and unmatched perspective into the scientific aspects of winemaking. Megan joined WALT and HALL in July of 2005 as an Enologist and in 2008, was promoted Assistant Winemaker under the direction of Steve Leveque. Currently, she is Winemaker for both WALT and HALL brands.