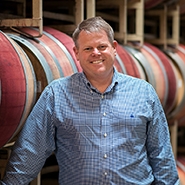 Mike Reynolds began his tenure at the inception of the winery, shortly after Craig and Kathryn Hall returned from Austria in 2002. Initially, Mike served as Winemaker and General Manager during the infancy of the winery, and was promoted to President in 2006. Since 2002, Reynolds has overseen development of the HALL and WALT businesses, including production, vineyards, operations, and construction. Mike previously worked for Jackson Family Farms where he was General Manager for both the Stonestreet and Verite wine facilities. Before joining Jackson Family Farms, he worked for 11 years at Schramsberg Vineyards in the Napa Valley where he was Winemaker for 8 years prior to assuming the additional role of General Manager.
Mike holds an MBA from the University of California at Berkeley, Haas School of Business, and a BS in fermentation science (winemaking and viticulture), from the University of California at Davis. In addition, Mike is a Board Member for the California Wine Institute, a member of the Young Presidents Organization, and Vice President (and manages a team) at Napa Little League. Mike’s youngest son, Jack, provided the artwork for the HALL “Jack’s Masterpiece” Cabernet Sauvignon.