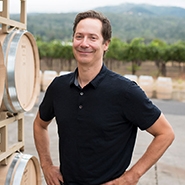 Born and raised in Napa Valley, Steve Leveque has earned a reputation for finely crafting wines that reflect the purity of the land. The 20-year veteran of the industry oversees the HALL Wines and WALT Wines portfolio of estate and single-vineyard offerings, crafting wines that have complexity and layers, but lead with deliciousness. With Leveque’s expertise, both HALL and WALT Wines have garnered critical acclaim and has earned praise from the industries top critics. Under Steve’s direction, over 200 wines have been rated 90pts and above for WALT and HALL. Steve honed his winemaking techniques during his 11-year tenure as a winemaker at Robert Mondavi Winery in Napa. He gleaned from forward-thinking ideas leading viticulture research and visionary collaborators, such as famed wine consultant Michel Rolland. Steve went on to work as executive vice president and winemaker of Chalk Hill Estate Winery in Sonoma, where he handcrafted an award-winning portfolio from small-lot Bordeaux varietals and Chardonnay as well. Steve is not only a winemaker but also a viticulturist, and therefore spends considerable time working with his vineyard managers and winemaking teams to produce fruit at a level of quality necessary for world class wines. Steve is dedicated to creating organic grape growing environments and practices environmental sustainability with all winemaking efforts.